With some of the best salmon fishing on the entire planet, Alaska is the place to be this summer. But with several different species of salmon arriving at various times during the season, it can be challenging to plan your outing. The latest Custom Seafoods blog post will help clarify the issue for you, as we discuss the various salmon species and when their peak season is here on the Kenai Peninsula.

Some of the earliest salmon to arrive are the Kings. King salmon are also the largest of the Pacific salmon species. Characteristics of the King salmon are an average length of 36 inches, a black mouth and gum line, with dark spots on their back and both lobes of the tail. A little known fact about King salmon is that while most of them have a vivid, red meat, approximately 5% of them contain a white flesh due to their different processing of dietary pigment! Look to June and July for peak king salmon run times as they head upstream to spawn.

Sockeye are typically the next to arrive, with their peak running June through August. With an average length of 24 inches, these powerful fish put up a heck of a fight! Other distinguishing characteristics of the Sockeye salmon are golden eyes, blue coloring on the back, with no spots on the back or tail. Perhaps their most distinguishing trait, however, is their beautiful red flesh they have as a result of their diet of plankton and krill. Sockeye salmon are also full of nutritional Omega-3 fatty acids providing a wide variety of health benefits.

The smallest of the Pacific salmon, coming in with an average length of 20-25 inches, Pinks typically peak in late summer, around August. With a 2 year life cycle, Pink salmon only return to spawn in the Kenai freshwaters in even numbered years; you’re in luck here in 2022! The Pink salmon have earned the nickname of “Humpy” or “Humpback”, due to the males developing large humps on their backs when they head inland to spawn. Pinks are a great source of vitamins, including B12. According to the USDA, a 3oz serving of Pink salmon contains 167% of the recommended daily volume of vitamin B12.

Also known as “Silvers” due to the coloring of their sides, Coho salmon are the latest arriving species. On the larger side, with an average length of 25-35 inches, Coho are some of the feistiest salmon out there, putting up a ferocious battle. Coho are typically identified by their wide tail stock, silver color, and spots that are only on the top lobe of their tail. Coho salmon are also very nutritious and a great source of protein, vitamins, and healthy Omega-3 fatty acids.

We’ve put together this handy chart for you to use as a reference as you plan your Alaska fishing trip. If you’ve already ventured out and have been lucky enough to reel in your limit of salmon, consider using the Sport Fish Processing Services here at Custom Seafoods. To give you an idea of how much fish to expect being returned to you after processing, we’ve created this reference guide. For the latest news and information regarding our processing services (including hours of operation), please visit our Facebook or Instagram pages.

Regardless of the time you head out for your salmon adventure, or the species you’re after, all of us here at Custom Seafoods wish you good luck on your fishing expeditions. Enjoy! 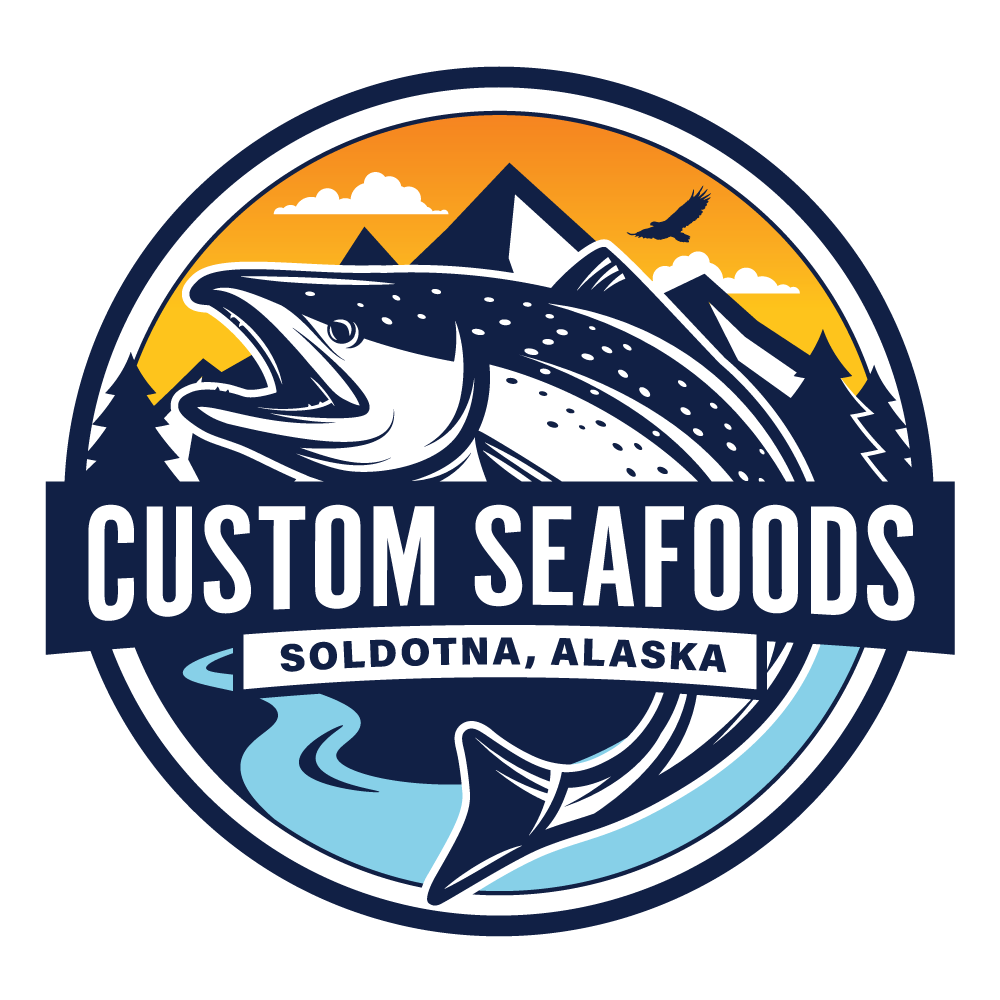 We feature wild Alaskan seafood, our own meat products, and a hand-picked collection of popular Made in Alaska gifts. We ship only the highest quality seafood to your doorstep.